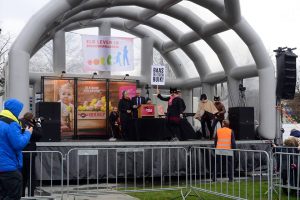 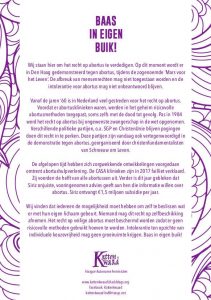 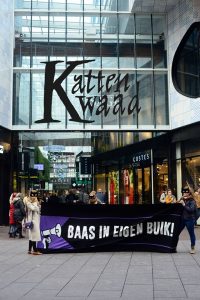 This morning, activists from the autonomous feminist initiative Kattenkwaad in The Hague, took action against the sexist outcome of a court case in Ireland. They went to the embassy of Ireland and decorated it with thongs! 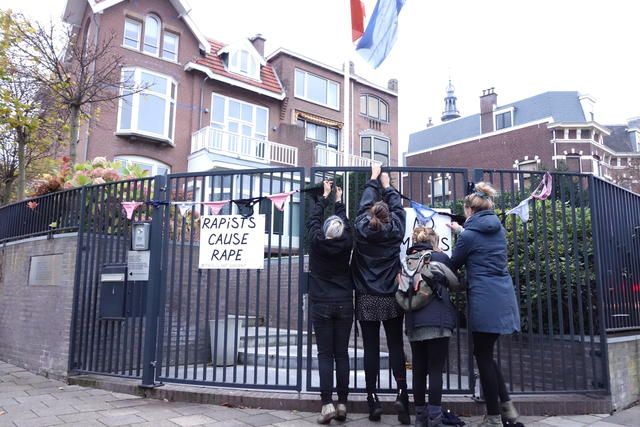 In Ireland a disturbing case of victim blaming took place during a court case focussing on the rape of a 17 year old girl. The defendant’s lawyer brought up the victim’s behaviour and clothing during the trial, and used her thong as evidence against her. Eventually it was judged that the rapist was not guilty, because, according to the defendant’s lawyer, wearing a thong makes you ‘open to the possibility of being with someone and the person she became attracted to ended up being the defendant.’

Kattenkwaad wants to address the problematic results of misogynist ideas and the issue of victim blaming. The autonomous feminist initiative took this action to show that we disagree with the way this court case was run. How is wearing a thong ‘asking for it’? No means no, and only an enthusiastic yes, is a yes with consent. The reality is that it doesn’t matter what you wear, because people are getting assaulted no matter their clothing. Sadly, sexual assault happens way too often, and the assaulters almost never feel the consequences. And the people involved in this case, deciding the assaulter was not guilty, will also not bear the consequences of his deeds. The system treating rape as something excusable, should be faced with the inequality and sexism they enable. In the Hague the closest place to reach the people contributing to the Irish political situation, is the Irish embassy. Therefore we took our thongs there. Because it doesn’t matter if you walk alone at night, or how much you had to drink. Clothing does not cause rape, rapists cause rape.

We demand the person who was found innocent to be held accountable for his actions. It’s time that the men who do this are not excused. Stop victim blaming!