On the 9th of March is the Women’s* March on Amsterdam!

Kattenkwaad will join the March and walk in the intersectional and anticapitalist block. If you also want to go, and would like to make a banner or a sign, you are welcome to join our preperation meeting on the 8th of March!

We will meet at the Samenscholing around 19:00, and together start making banners/signs. If you don’t know what to make, you can help us with painting the Kattenkwaad banner.

There will be vegan snacks at the preperation meeting and nice music.

We hope to see you there!

Women* refers to everyone who identifies as a woman, or who struggles with being misgendered as a woman. 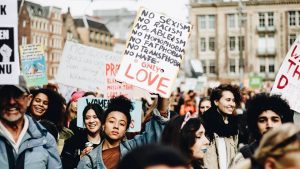 On the 22nd of March, the feminist initiative Kattenkwaad organizes a benefit eatcafé and a concert for Abortion Network Amsterdam (ANA)!

ANA provides the women with housing and some of the basic needs, help with transportation and translation in some cases. We make sure they get all the documents needed for the abortion, help set up an appointment as well as choose the appropriate clinic in the Netherlands.

Come and visit us to get more information on Kattenkwaad, and on how you can get involved. At our stand you will find some zines, buttons, patches and anarcha-feminist flags.

On monday the 4th of February Kattenkwaad organises a benefit eatcafé in the Ruige Rog! Since we started our collective at the end of last year, we could use some money to create some great anarcha-feminist stickers, artworks, flyers, patches and more!

Kattenkwaad is an autonomous feminist initiative from the Hague, initiated by local activists who wish to organise themselves around feminist issues in a horizontal way. We strive for a society free of racism, sexism, transphobia, homophobia or other discriminatory or oppressive behaviour and consider the revealing and rejection of social inequality the first necessary step to achieve change. Therefore we organise different kinds of gatherings and actions, directly or indirectly relating to patriarchal oppression or gender inequality.

Food will be on donation and of course it will be vegan!

Open Meeting Kattenkwaad
On Friday the 21st of December, the autonomous feminist initiative Kattenkwaad organizes an open meeting in the Ruige Rog.
Everyone is welcome to come to this meeting and discuss what feminism means for us, and how we can actively give this form within an intersectional feminist initiative. We will discuss important standpoints that we strive to focus on as an initiative, and we will discuss how we can make this visible (e.g. through an ‘code of conduct’ or a manifest).
We will also look back at what we have organized in the few months that we exist, but we will mainly focus on what else we can organize and do!
If you have ideas for actions and activities, you are very welcome to join and share your ideas and to discuss them. If you have never been to an activity hosted by Kattenkwaad, you are also welcome: new perspectives are valued a lot.